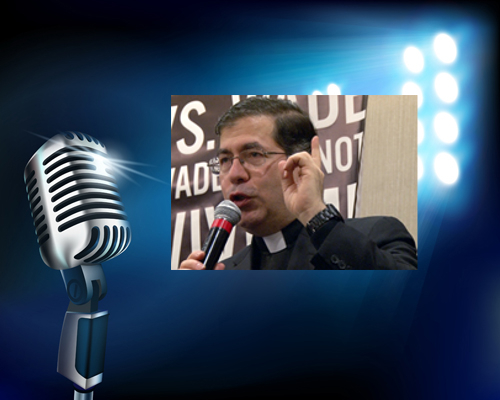 Fr. Frank Pavone is one of the most prominent pro-life leaders in the world. Originally from New York, he was ordained in 1988 by Cardinal John O’Connor, and since 1993 has served full-time in pro-life leadership with his bishop’s permission. He is the National Director of Priests for Life, the largest pro-life ministry in the Catholic Church. He is also the President of the National Pro-life Religious Council, and the National Pastoral Director of the Silent No More Awareness Campaign and of Rachel’s Vineyard, the world’s largest ministry of healing after abortion.

Recently Fr. Pavone and I discussed his latest book Proclaiming the Message of Life: Weekly Reflections from the Lectionary

. You can also find my review here.

PETE – What was your driving force behind writing Proclaiming the Message of Life?

FATHER FRANK PAVONE – One of the good friends of our ministry of Priests for Life was Dr. Bernard Nathanson, one of the founders of the abortion industry in the United States. After he became pro-life, and began relating the history of how he and his colleagues started legal abortion in America, he said to groups of priests, “We would never have gotten away with what we did, if you had been united, purposeful, and strong.” He and his friends took a calculated risk that the clergy would be relatively silent on the abortion issue, and that is what happened. That is why he believed that the key to stopping the work of the culture of death was precisely to activate the clergy to speak up.

That has been the driving force behind Priests for Life, and behind this book, which really summarizes the work of 25 years of interacting with clergy, conducting seminars for them, preaching in their parishes, and providing individual consultation on how they can be more effective in preaching on abortion.

PETE – Why do you think your brother priests as well as deacons are sometimes seem so hesitant to preach on pro-life topics?

FATHER FRANK PAVONE – The book presents some 32 reasons for the fears and hesitations about preaching on abortion. Many of them have to do simply with a lack of confidence in handling conflict and the emotions that criticism brings. Priests and deacons know the teaching, they know that the teaching is right, they know they are responsible for teaching it, but they are simply afraid and often feel alone.

There is also a persistent flow of bad advice coming to parishes and dioceses about the legal ramifications of preaching on abortion. There is a mythology out there that somehow, especially at election time, we are going to risk our tax exempt status. Nothing could be further from the truth. No church has ever lost its tax-exempt status for anything that was preached from the pulpit. Not only that, but our freedom — and duty — to preach does not come from the government, but from Christ. This too, is an area where the clergy need more confidence.

PETE –  Was this book written exclusively for homilists? How can the laity use this book?

FATHER FRANK PAVONE – The book is definitely useful both for clergy and laity, because while the clergy will use it to preach the pro-life message from the readings, the laity will use it to reflect on those same readings that they will hear. Anyone working in the pro-life arena or anyone even remotely interested in the topic will find abundant materials here for reflecting on the connections between our pro-life commitment and not only the Scripture readings, but the various liturgical feasts and seasons of the year, and the various doctrines we believe, including the Eucharist, the Trinity, the Holy Spirit, the Virgin Mary, and much more. It is great for spiritual reading, and also a very useful resource for anyone writing articles or giving talks on pro-life from a faith perspective.

PETE – Perhaps a difficult question but how were you able to pull a pro-life message out of every Gospel reading in the lectionary, all three cycles?

FATHER FRANK PAVONE – First of all, the Scriptures are the Word of Life. The whole intervention of God in human history, which the whole Bible is about, is about a God who gives life. So it is an overarching theme of Scripture that literally fills every page.

In my own theological studies, I specialized in Sacred Scripture, so when I began my full-time preaching on abortion in 1993, as National Director of Priests for Life, it was easy for me to draw on my biblical studies to begin preaching every homily on abortion. The book reflects nearly 25 years of experience of doing this, along with the experience of the other priests who have been privileged to work with Priests for Life on a full-time basis over these years.

PETE – This almost seems like a monumental task. How long did it take to compile Proclaiming the Message of Life?

FATHER FRANK PAVONE – Over the course of my ministry with Priests for Life since 1993, I have been preparing homilies that focus on abortion based on the Sunday readings. Shortly after my ministry began, I started sharing with priests, via email messages and web postings, and our Priests for Life newsletter, outlines of how to do the same in their preaching. So when it came time to put this book together, the short term task of compiling it for the publisher did not take long at all; the work of actually thinking through and developing the content, on the other hand, is the fruit of two and a half decades of effort and experience.

PETE – Time for my signature ending question. This is a blog about books. What books are currently on your bookshelf to read?

FATHER FRANK PAVONE –  As a pro-life leader, I get to see manuscripts of a lot of books in advance, and one of them that I’m very excited to read is the book of long-time pro-life activist Joseph Scheidler, called “Racketeer for Life.” It is his memoirs, and will be released in the fall. Likewise, our executive director, Janet Morana, is preparing a wonderful book called “Healing the Shockwaves of Abortion,” and it focuses on how the wound of abortion is multifaceted, extending not only to the mom and dad of the aborted child but also grandparents, siblings, aunts, uncles, cousins, friends, abortionists, and the pro-life community. Every abortion wounds everybody in some way.