Skip to content
Home/2016/CBB Review: A Call to Mercy
Previous Next

CBB Review: A Call to Mercy 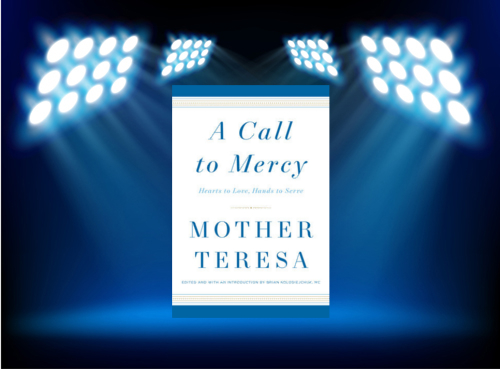 A Call to Mercy: Hearts to Love, Hands to Serve

is a collection of posthumous writings by Mother Teresa herself. It’s release coincides with Pope Francis’ Year of Mercy and the Vatican’s canonization of Mother Teresa on September 4th. Father Brian Kolodiejchuk provides the introduction as well as compiling the writings for the book. Father served as postulator for the cause of beatification and sainthood of Mother Teresa.

The book serves as a faithful witness of Mother Teresa’s wisdom and example on how to show others mercy. It was often acknowledged that while she lived, Mother Teresa was a living saint, though much to her chagrin. Her writing substantiates and proves these observations. Mother Teresa is a saint who walked among us who only desire was to turn the spotlight off of herself and instead shine it on the plight of the poor whom she served.

The books fourteen chapters cover the myriad of Mother’s mission while here on earth. These also so happen to be the seven corporal and seven spiritual works of mercy. So that you have an idea of what is covered the chapters are:

Feed the Hungry, Give Drink to the Thirsty, Clothe the Naked, Shelter the Homeless, Visit the Sick, Visit the Imprisoned, Bury the Dead, Instruct the Ignorant, Counsel the Doubtful, Admonish the Sinners, Bear Wrongs Patiently, Forgive Offenses Willingly, Comfort the Afflicted, Pray for the Living and the Dead.

Each chapter contains a short introduction to Mother Teresa’s understanding of each, this is followed by a selection of quotes from her writings (these include letters to her sisters, friends, public addresses and speeches). Additionally, there are testimonies as given by those who worked closest to her. Rounding out each chapter are a number of questions that prompt reflection and a prayer to aid in this reflection.

In A Call to Mercy we once again hear the voice of Mother Teresa speaking to us about God’s message of merciful love and our own part in playing a part as a channel of that love. Mother Teresa was the epitome of love. She exemplified love and mercy her entire life and taught us through her example how to do the same. From the introduction:

The occasion of Mother Teresa’s canonization is cause for joy for all of us from those who witnessed her from afar to those like Father Brian Kolodiejchuk who knew her personally. Everyone can once more hear the voice of Mother Teresa through her own words in the newly released A Call to Mercy. We can all learn some measure of mercy from her and find a way to enact it in our own corner of the world. With great joy and the authority of the Church we can now proclaim, Mother Teresa of Calcutta, pray for us!