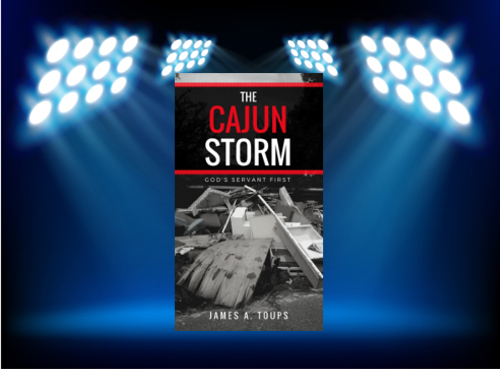 James (Jay) Toups brings to the forefront the struggles Louisiana faced in the days and months following what has become known as the Cajun Storm. Haven’t heard of it? Not surprising, as the media and government largely ignored the devastation wrought by this once in a thousand year flood that struck in August 2016. Jay writes about the tragedy and the triumph in his latest book The Cajun Storm: God’s Servant First

As I worked my way through this book I was at first overwhelmed by the size of this storm. Of significance is the fact that this storm struck southern Louisiana within a decade of Hurricane Katrina. In comparison to that epic hurricane this particular storm lacked the wind of Katrina however it had one significant factor. In a span of 72-hours the Cajun Storm dumped 30 inches of rain – three times as much  as Katrina – over a 150-mile path. This resulted in 7.1 million gallons of water engulfing homes and businesses due to a drainage system that simply could not handle that much water. 100,000 homes were damaged, 30,000 people had to be rescued and 13 people died. Those numbers are simply staggering.

Imagine waking up in the morning rolling out of bed and finding yourself standing in water. That’s not a good scenario. Many homes took in three to four feet of water and mud. The recovery efforts ahead of the homeowners seemed insurmountable. Many people had no flood insurance – why would they. as they were not in a flood zone? Jay describes the devastation:

This book is not about despair. Jay’s book is about hope. It’s about the resilient people of Louisiana whose faith-filled spirit is hard to crush. It is about a population of people who learned quickly in the aftermath that waiting for governmental response was not an option. A people who stepped up and helped their neighbors survive and thrive in what could have been the knockout blow for any community.

Jay and his family found themselves largely out of harm’s way, except for a near costly decision to go the gym the morning of the first rains, their home was unharmed. One of the largest efforts was feeding the displaced. At the time of the writing of this book volunteers had delivered some 1,100 meals to the victims. This joint effort has been accomplished through caring neighbors who cooked the meals in their own kitchens and hand-delivered meals to the areas affected by the storm. Jay describes a number of his own trips wading through knee-high waters to deliver hot meals to a homeowner in need. To this day those meals are still being delivered to those working to rebuild their shattered houses.

In a larger sense, this book about more than a physical storm. Jay touches upon Jay write about the human spirit. He talks about not only those resilient spirits that overcome tragedy as it strikes them, but he also talks about the generous spirit of those fortunate enough to not be in harm’s way. Through the dedication and generosity of residents and business those effected by the storm were provided with much needed donations of food and building supplies.

On the surface, as one reads the first part of the book a sense of despair sets in. To comprehend the unimaginable suffering this storm caused brings one to pause and consider how good they have it. The feeling of despair quickly fades as one progresses through the book. It is replaced with a feeling of hope. As we look at the news each day we only see the bad in society. Jay Toups shines a light on the good within the human spirit. His book shows that “boots on the ground” and good old fashioned Christian charity can be far more effective than a government micro-managing a situation. This spirit is the one that built our country and is the one which will allow it to survive. Thank you for the reminder Jay.

To hear more about The Cajun Storm as well as Hurricane Katrina listen to my Breadbox Media show Off the Shelf where was my guest.