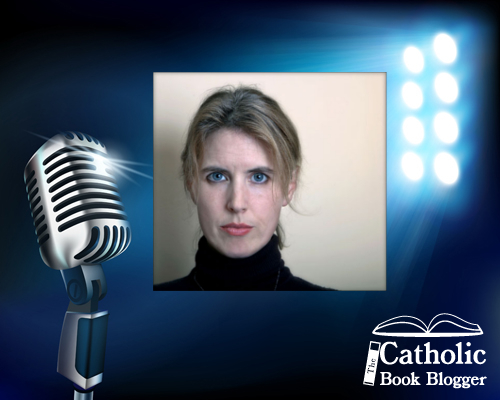 JULIE: Thank you for writing about your conversion from staunch atheism to Catholicism. I appreciate your candidness, and I am thrilled for you, your family, and all those you come in contact with. I read a lot of books for the Catholic Book Blogger site, and there are some I don’t review because they were lackluster and those I do review I often do not an interview, but I specifically asked to interview you.  Although I am a cradle Catholic many times while reading your book, I found your thoughts and experiences relatable.  (Maybe it has something to do with only having a two-year age difference – I’m older.)

SALLY READ: Thank you! I’m so glad that you enjoyed the book and could relate to it.

SALLY READ: This is a topical and appropriate question! You are right in saying that Fabio was not thrilled about my conversion. But over the last seven years, he has softened his stance considerably, and he is slowly drawing closer to the Church. I have no doubt that my prayers and the prayers of many people who read the book are having some great impact! However, we live in a fairly secular society– at least relatively speaking, for a town so close to Rome. My daughter’s friends are almost uniformly non-Mass goers (generally they will study for the sacraments, receive the sacraments and then attend Mass rarely).

I have a lot of non-Catholic friends, dating from my atheist days, and my English family is almost overwhelmingly atheist. Even though I now have a lot of very good, even holy, Catholic friends, we live in the mix, so to speak. I’ve thought about this often recently as I’ve heard things about the ‘Benedict Option’ and I have friends who home-school and actively seek to shelter their children from any unholy or non-Catholic influence. For good or ill, my daughter (and husband!) are exposed to a very wide variety of situations and people, and questions like “Why do we need to go to Mass?” or even “Why trust God?” can sometimes be heard in our house. The English mystic Caryll Houseslander described herself as a ‘rocking horse Catholic,’ as opposed to a cradle Catholic, because she became a Catholic at the age of six. Although my daughter is technically a cradle-Catholic (she was baptized at nine months for various social reasons), I brought her up as an atheist until she was four when I became Catholic myself and began to school her in the faith.

So my daughter is also a rocking horse Catholic, and it’s given her a swaying view of the world and of God, where she sees and questions from many perspectives. I’ve decided to go with this and see it as a positive thing (there’s not an awful lot I can do to change it!). What it means is that we talk about faith a lot, we pray a lot. We turn to novenas and various saints, we discuss the frustration of prayer if it seems to be fruitless, and what that can mean. We as a family live in a state of ongoing conversion (although I am now a convinced and faithful Catholic, I, too, am striving for sanctity; conversion never ends). I talk to my daughter about that sense of not feeling God’s presence– because she knows, from my book, that I do feel His presence very strongly at times. So why would she not feel that, and how can she be patient about that, etc. In a sense, I feel she is very alive in her faith precisely because of my abrupt conversion and all that that has meant, and precisely because she does endlessly interrogate. Nothing is taken for granted.

Obviously, I’m talking a lot about my daughter, but my husband soaks all this up too.

I’m very aware that my conversion concerns them both and their salvation is at the forefront of my mind. When I go to the houses of Catholics and the whole family is absolutely on the same page I sometimes feel wistful. But I’ve always worked best on the margins of things, I’ve always liked bucking the trend and trying to make a change, so I feel God has put me here for a reason. And God is so very present in these states of conversion, these battles for souls! I sometimes feel like we’re all Nicodemus meeting Christ by night.

JULIE: Is there anything about your conversion story you didn’t include in the book but now wished you had?

SALLY READ: There are some things I didn’t include but none that I wish I had. It’s a shortish book which is my favorite kind– I’m a poet, so I value brevity and form. I wanted to avoid anything nonessential, anything too biographical that wouldn’t be important to the reader. There were also certain wise omissions. I don’t believe it’s fair to talk about other people- my husband, my mother for example– too much. They didn’t ask to be in the book, and their thoughts and feelings, beyond the essential, should not be chewed over to no great effect.

JULIE: At the very end of the book, you mentioned changing your behavior.  What have you changed since the writing of this book?

SALLY READ: Conversion, for me, is very much about a deepening of trust. I’m a naturally anxious person; I come from a long line of worriers who compensated by organizing life to the nth degree. Every day, for me, has to be a renewal of trust in God. Sometimes, by the day’s end, I’m back to a state of anxiety again, but I think I’m slowly improving! I’ve also gone much more on the offensive with catechizing my family (see above). Aside from that, it’s the daily deepening; trying to discern His call; how can I best serve Him and my fellow man. I still ache to do more hands-on physical work to help people (as the book makes clear, I was a nurse and have done a lot of hands-on work in my time), but those opportunities still don’t seem to be presenting themselves. So I accept more and more that God wants me to do the work that I’m doing (writing and looking after my family). It’s easy to feel you should be crossing continents on horseback and nursing leprosy patients, but often the work that God wants you to do is right in front of you. I would love to say I’m holier in some way, but I feel less not more sure of that as time goes on! (Apparently, that’s a sign you’re on a spiritual journey.) Really, you’d have to ask those around me.

JULIE: On page 113 you wrote that you were “questioning the violence of casual sex and women’s collusion in that.”  Your observation struck me since I, too, have wondered about a woman’s decision to have casual sex since there is nothing good that comes of it, at all.  Have you done any writing on that or speaking on that?  Would you consider it?

SALLY READ: This is such a thorny topic, particularly these days. I am very struck by how feminism has not empowered nor made women any more respected. How we as a sex seem, generally, almost incapable of respecting ourselves and our bodies. Nor do we (I’m generalizing, obviously) seem to be able to appreciate what it is that makes us women, and how that essence cannot be purchased through surgery or medication. I’m outraged by the degradation of sex and how women, willingly or unwillingly, go along with it. I’m talking as well about the ‘diversification’ of sex– how contraception and pornography have turned sex into a recreational activity that actually hurts both parties, psychologically and even physically.

Would I speak or write on it? In many ways, I feel a bit out of touch. I was a part of the London dating scene in the 1990s and I was aware of trends and issues (telling and shocking to note that sex has ‘fashions’. I did once write a blog post about how the vagina has gone out of fashion. That in itself is a terrible indictment of the culture). Now I am a staid married lady. But I do have thoughts, and maybe I will feel called to write them down in time.

A friend of a friend is an undertaker, and he recently said that what has changed most in the last decade or so in his business is the lack of respect given to the dead person. This, to me, speaks volumes about how we view the flesh generally. As an atheist, I was always very uneasy about disrespecting the dead, and the body in general. It took conversion to understand why. The Incarnation teaches us so much about our physical selves.

JULIE: And finally, the question that Catholic Book Blogger interviews end with is ‘What is on your bookshelf now that you are reading?’

SALLY READ: I’m re-re-reading “Abandonment to Divine Providence.” I read it seven years ago and I re-read it before Christmas. That time it changed me– it was the right time to read it. I also love that it was one of Dorothy Day’s favorite books. I’m also reading “Jacob’s Room” by Virginia Woolf because it’s one of the few books of hers that I haven’t read. Woolf is a poet even though she didn’t write formal poems. Simply put, poetry’s cadences, metaphors, and connections are in absolutely everything that she wrote. She was an atheist-poet who struggled and was desperate to get at the Truth. For all of those reasons, I feel close to her. I believe she was closer to God than she knew.