Off the Shelf 029 with Jean Heimann 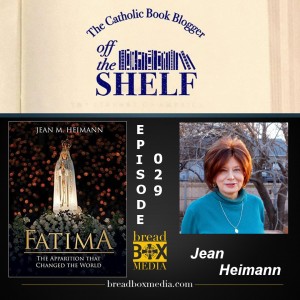 Jean M. Heimann is a Catholic author freelance writer with an M.A. in Theology, a parish minister and a speaker, a psychologist and educator, and an Oblate with the Community of St. John. She is a member of the Blue Army and the founder of Our Lady of Fatima Rosary and Study group. Jean is the author of Seven Saints for Seven Virtues (Servant, 2014) and Learning to Love with the Saints:  A Spiritual Memoir (Mercy, 2016).  Jean has had her work published in numerous Catholic periodicals and on Catholic websites, some of which include:  National Catholic Register, Catholic Exchange, Canticle Magazine, and St. Anthony Messenger/ America. You can visit Jean at her award-winning blog, Catholic Fire www.jeanmheimann.com/blog/

On this episode of Off the Shelf, Jean I take a look at the 100th anniversary of Fatima and her new book Fatima: The Apparition That Changed the World

. One hundred years after the appearance of Mary to three shepherd children in 1917 is there still a significance to these? Does the message of Fatima still ring true and hold meaning for us today? Join us as we take a deeper look at Fatima one hundred years later.

Listen to this episode here.