The Apostles and Their Times 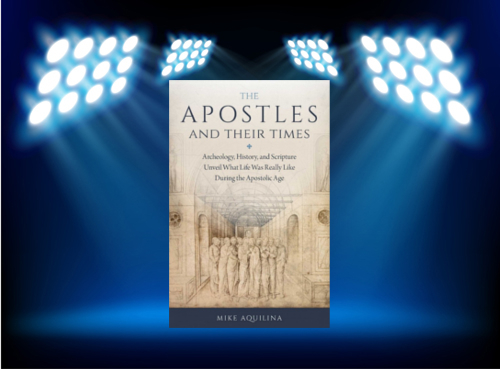 When it comes to the church fathers and the early church, in general, I, like many, turn to the writings of one particular author. That author is Mike Aquilina who is now clocking in on the mid-fifties with his backlog of work. Recently he released The Apostles and Their Times: Archaeology, History, and Scripture Unveil What Life Was Really Like During the Apostolic Age. The book provides an inside look at what exactly those early days of the early church were like.

Early on in the book, Mike states that “in the days of the early church life was not compartmentalized into the sacred and the secular. Religious duties were things that had to be done, just as much as building roads.” This stood out largely as I read my way through the book. This being an almost unbelievable concept when looking at the opposition we see today between the secular and religious in our country and the world today.

Mike also raises another intriguing point that I think many may forget. The Apostles were ordinary men. There was nothing spectacular about any of them. Peter, who went on to lead the group, was a seasoned fisherman. A pretty tough guy who left his nets behind to lead a church of all things! What does this tell us today? We do not need a pedigree or a fancy doctorate….though it helps…..to walk out into the vineyard and play a key role in Christ’s church.

The Apostles AND their times (emphasis intended) shine as an example of evangelization to us all. Stretching back through the hour glass of time, the hands of history show us that something old can indeed be something new. Like the original twelve that Jesus chose to build his fledgling church upon we too are called to renew the church. Not CHANGE the Church mind you, rather renew a Church in a society that at times seems to be deaf to the message of Christ. What is that message you might ask? Four simple letters. L-O-V-E.

Mike Aquilina hits it out of the park once more with a book about Church history that is engaging and informative. History does not have to be dull or dry, and it never is when you pick up a book on the early church that Mike has written. Read this insightful book about twelve ordinary men who changed the world. Take their example and change the world around you. It worked two thousand years ago….it can once again!

To learn more about the book listen to my interview with Mike on Off the Shelf 042 with Mike Aquilina.