Skip to content
Home/2017/Why Are We Catholic? A Look Inside the Faith From Brandon Vogt
Previous Next

Why Are We Catholic? A Look Inside the Faith From Brandon Vogt 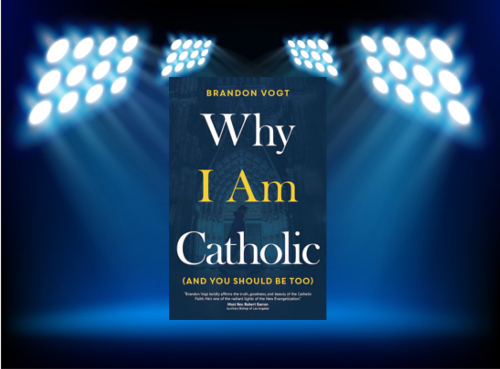 Sometimes in our faith journeys we are asked the question to trump all questions. “Hey Pete, why are you Catholic?” That is a valid question whether you are a cradle Catholic or a convert such as myself. The reasons you may be asked that question are unending. Perhaps it’s a friend asking out of curiosity. Maybe you have an online presence, and someone asks the question in an attempt to catch you off guard. Regardless of the reason, Brandon Vogt has a new book out that gives you solid responses to such questions. The book is Why I Am Catholic (and You Should Be Too), and it’s one I recommend you purchase, read, then give to a family member or friend who may question the Catholic faith.

Why is it we find ourselves having to defend the faith? Suffice it to say it has been an ongoing struggle for Catholics for centuries. And what is it we face during a sometimes seemingly endless barrage of questioning. Brandon gives some examples in the introduction.

“Why in the world would anyone become Catholic? Isn’t Catholicism a backward, intolerant, bigoted religion? Isn’t it run by pedophile priests and full of scandals? Doesn’t it degrade women and LGBT people and obsess about sex” Isn’t it plagued by pointless rules that stifle real faith?”
Sound familiar? Brandon lays out the reason why Catholicism is right about a lot of things….and might I be as bold to everything. Before he does so, however, he sets the book with some rather staggering and depressing numbers. The Catholic Church is hemorrhaging people. Fifty percent of millennials who were raised Catholic have left the church making “former Catholic” one of the largest religious groups in America. Eighty percent of those who have left the Church did so before the age of twenty-three.

To make things a bit more depressing, Brandon introduces a Pew Study figure called the loss-gain ratio. This is the ratio of people who leave their religions vs. those who join that religion. Catholics are not alone as it turns out no Christian group has a loss-gain ratio of less than one. The Catholic Church however, has a staggering 6.45! That means for every one person who joins the Catholic Church six plus are walking out the back door.

So how do we combat this? Frankly, it’s a two-step process. Step One is to educate ourselves. Discover the undeniable truths of the Catholic faith and then proceed to Step Two. Share these truths with others as opportunities arise.

Why I Am Catholic (and You Should Be Too)is a SOLID book of approachable apologetics for all. Learn your faith, love faith, and defend your faith. BUT don’t stop there. Allow Brandon’s book to be the springboard that ignites a life-long passion of drowning yourself in an ever deeper understanding of faith. Plus, there’s a bonus. The appendix Brandon has included of must-read books will keep you busy for quite a while.