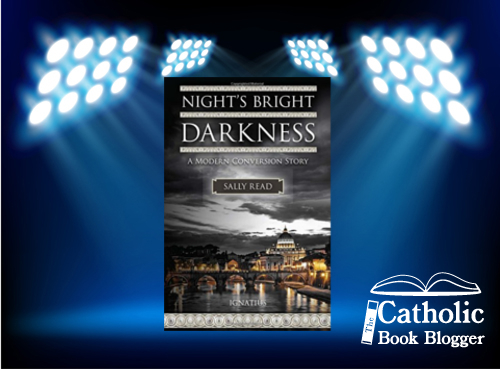 At the end of every delightful book I am both sad and energized – sad to have finished the journey with the author and energized by the story.  This “Modern Conversion Story” of Sally Read, Night’s Bright Darkness: A Modern Conversion Story, published by Ignatius Press is riveting.  Sally is a British poet living in Rome and was a staunch atheist up until a few years ago.  Her conversion journey started after an interview she had with a Catholic priest for a book she was writing about female sexuality.  It would seem that a priest would be an unlikely source, but “God moves in mysterious ways” and the interview was the beginning of a glorious friendship that nurtured and enabled Sally’s entrance into the Catholic Church after only ten months.

The author’s writing style is that of a poet and since I am not one I cannot imitate her flowery, expressive use of language, but I can, and did, appreciate it.  Her style is also blunt in ways that I could relate to since that is how I communicate.  She is very straight forward about the impression her atheist father left on her upbringing and the affect the brokenness of the Catholic Church had on her angry attitude.  But as she grew in love with Jesus, Who broke through her worldly veneer and penetrated her heart, she also grew in love with His Church.

Night’s Bright Darkness: A Modern Conversion Storyaddresses her way of life before her conversion and it is no different than the life of any woman that has bought into the worldly, feminist mindset, mine included.  And while God has ever so slowly and tenderly transformed me over the last 20 years, He seemingly moved with a quicker step with Sally Read, and thankfully so because now we have a delicious book to read that we can identify with.  Enjoy!